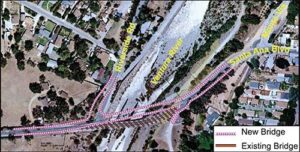 The existing Santa Ana Boulevard Bridge will remain in place while the new taller, wider bridge is being built.

Construction is set to begin next month on one of five public infrastructure improvement projects that need to be completed before the eventual removal of the Matilija Dam. On Tuesday, the Ventura County Board of Supervisors unanimously approved plans and specifications for the $16.5 million Santa Ana Boulevard Bridge Replacement Project.

The board also awarded a nearly $11.5 million contract for construction of the bridge to a Westlake Village firm, Security Paving Company, Inc., the low bidder on the project. The bridge, built in 1960, is located on Santa Ana Boulevard over a constricted section of the Ventura River, west of Highway 33 in Oak View.

The project involves widening the channel and replacing the existing 210-foot-long bridge with a 350-foot-long bridge that’s both higher and wider in order to handle larger flood and sediment flows that are expected with the dam’s removal.

“Although the existing bridge where the Santa Ana Bridge crosses the Ventura River is sufficient for traffic needs and is in good condition, its insufficient width and height is the reason the bridge is being replaced, in preparation for the dam removal,” said David Fleisch, county director of roads and transportation.

Not only will the new bridge help to minimize downstream impacts of taking out the dam, it will improve passage and habitat for southern steelhead and other native fish, and will accommodate the flow of more sand and cobble to Ventura County’s eroding beaches, according to a staff report.

The bridge replacement project is a component of the larger Matilija Dam Ecosystem Restoration Project, begun more than 20 years ago. “The ultimate goal of the project is to restore the aquatic habitat of Matilija Creek and the Ventura River, to encourage fish passage and restore natural sediment transport. The removal of the dam is the key objective, because that will increase peak flows and sediment loading,” Fleisch told the board.

Space under the bridge will be approximately 50 percent wider, going from 150 feet to roughly 230 feet. The wider floodplain created by the new bridge will carry a larger capacity than the current bridge can handle, Fleisch said Tuesday.

In May 2019, the Ventura County Public Works Agency was awarded a $13.4 million grant to replace the bridge from the California Department of Fish and Wildlife. The project was one of 38 projects in California totaling more than $48 million to receive funding through Proposition 1 and Proposition 38 restoration grant programs for watershed and other environmental protection programs.

Construction of the new bridge and removal of the old one will be done during two dry seasons, in accordance with the county’s environmental permit. “Working in the dry seasons minimizes the impacts to fish, frogs or any other biological resources,” Fleisch said.

The new bridge construction is slated to begin on April 6, with the existing bridge remaining in place while the new one is being built.

Impacts for motorists, bicyclists and pedestrians will be minimal during construction, except for a two-week period when the bridge will be closed to accommodate the switch from the old bridge to the new bridge.

A full traffic plan including detours and alternate routes will be available prior to the temporary closure of the road, according to VCPWA.

Traffic will be shifted onto the new bridge in early 2022, with construction completed in fall of 2022, Fleish told the board.

Four other infrastructure improvement projects will need to be finished before the dam can be removed, including three downstream levees and the Camino Cielo Bridge.

VCPWA Watershed Protection Director Glenn Shephard told the board Tuesday the planning horizon for the removal of the dam is 2035.